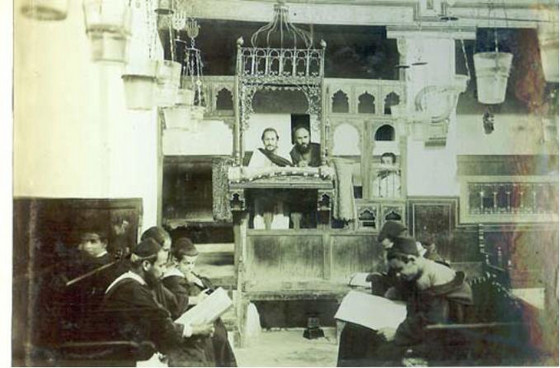 Fez, home to a flourishing Jewish community during the 17th century, was also the location of two well known temples, Rabbi Shlomo Ibn Danan Synagogue, built and founded by the Ibn Danan family, and the nearby Mansano Synagogue. The Ibn Danan synagogue's mellah, the Jewish quarter located at the back of the building, used to be the largest in Morocco and served a population of over 22,000. Both synagogues contained notable interiors. The Ibn Danan building is influenced by Islamic and Moroccan design, with wooden ark doors tooled with stucco decoration and surrounded by a Moroccan-style patterned tiled border. The seating in the synagogue is painted with geometric patterns common to Islamic architecture. A wrought-iron cage used to hold scrolls, known as a tevah, is detailed with curlicues and connects to a filigree screen with Moorish arches. These interior furnishings are original and, like the overall structure of the Ibn Danan synagogue, are still intact.
The synagogues were closed for services during World War II, and since then have deteriorated. The plaster was peeling, the roofs were collapsing, the waterlogged beams were rotting, and windows were missing and broken in the Ibn Danan Synagogue. These damaged physical elements and the original furnishings were conserved by WMF in partnership with Morocco's Ministry of Culture, Fez's Jewish community, and the Judeo-Moroccan Cultural Heritage Foundation in 1996. By 1999, additional assistance from family members living abroad helped open the Ibn Danan's doors to the public.
The Ibn Danan and Mansano synagogues are located in the cultural, historical, and commercial center of Fez, the Medina. Their central location is a reminder of the diverse cultural forces that shaped Morocco over time. From antiquity through the 19th century, Fez served as a major cultural and economic hub. There are about 250 synagogues and 30 Jewish cemeteries in Morocco but many sites have been abandoned due to the decrease in the Moroccan Jewish population. Conserving the synagogue is an important reminder ofJewish cultural heritage in Morocco, which continues to serve the needs of the current Jewish population in Fez.

Hermann Burchardt (1857-1909)
German-Jewish explorer,he was a pioneer in the field of Jewish ethnography.From 1890 he traveld to remote places in Australia,Asia,the Middle East,North Africa and Yemen,photographing and documenting Jewish and other customs and folklore.